WHAT TO KNOW ABOUT THE ‘FIDUCIARY RULE’ 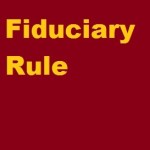 “The Department of Labor’s revised ‘fiduciary rule’ is a great victory for consumers,” writes Alicia H. Munnell in a highly informative marketwatch.com piece. The rule is complicated but the goal is to make sure that those in the financial services industry act as fiduciaries – that is act ‘solely in the interest’ of clients – when giving advice regarding people’s retirement saving.” Munnell’s excellent article continues:

“This rule is the result of a long and tortuous effort.  In 2010, the Department of Labor put forth a proposal to require more retirement investment advice to be in the client’s best interest, but later withdrew it in the face of enormous opposition.  On April 20, 2015, DOL proposed a new rule to ensure that retirement savers would get their advice from fiduciaries.  After a series of unsuccessful efforts to block the proposal by brokerage firms and a failed attempt to attach a rider to the end-of-year spending bill, the final rule was released on April 6, 2016.

“The new rule is needed because the retirement savings landscape has been transformed since the Employee Retirement Income Security Act (ERISA) was passed in 1974.  The displacement of defined benefit pension plans by 401(k) plans and Individual Retirement Accounts (IRAs) has transferred responsibility for investment decisions from employer to employee.  Many workers have accumulated plan balances that are insufficient to maintain their standard of living in retirement.  Although a number of factors have contributed to inadequate plan balances, subpar investment returns due to high fees undoubtedly played a part.

“The new rule is designed to eliminate the incentive for brokers to put retirement savers in inappropriate investments.  Fiduciaries can’t do that, because they are bound by the ‘best interest’ standard.  So the strategy of the rule is to expand the group of investment professionals who must act as fiduciaries.  Under ERISA, anyone providing investment advice within retirement plans must act as a fiduciary, so the lever used to expand who is considered a fiduciary is to redefine the term ‘investment advice’ by replacing a 1975 five-part test with a more sensible and inclusive four-part test.

“Advisors will be held to the fiduciary standard with respect to not only 401(k) assets but also distributions from 401(k) plans and IRA assets.  In fact, the recommendation to roll over is itself a fiduciary act.   Extending coverage to the rollover and then to IRA assets is essential, given that both 401(k)s and IRAs are integral and equally important parts of the retirement income system.

“Six ‘carve-outs’ in the regulation exclude persons and activities from the fiduciary rule: 1) counterparties to large plans; 2) swap counterparties; 3) employees of the plan sponsor; 4) platform providers; 5) financial valuations and appraisals; and 6) investment education.  While the carve-outs mostly cover situations in which fiduciary status would not be appropriate, I wish that DOL had not kept the carve-out for platform providers.  Research shows that mutual fund families acting as trustees for 401(k) plans favor their own affiliated funds, particularly their poorly performing funds, to the detriment of plan participants.

“Finally, the rule contains a ‘best interests contract’ (BIC) exemption because ERISA prohibits fiduciaries from receiving commissions and other forms of conflicted compensation.  To permit the continued use of commission-based distribution channels, brokers must sign a contract that says they are putting the customer’s best interest first.  The BIC requires that Financial Institutions give the retirement savers a private right of action for any breach of contract, which is particularly important for advice regarding IRA investments since IRAs are not covered by ERISA.

“The net result of this complicated rule is that retirement savers will get better advice, because it will be driven by fiduciary concerns rather than by incentives to put customers in expensive products.  These changes will be important for those who opt for brokerage accounts in 401(k) plans, for those considering rollovers from 401(k)s to IRAs, and for those making ongoing investment decisions in IRAs.  It’s a good day! “