WHAT TO DO IF THE RETIREMENT NEST EGG IS, WELL, LAYING AN EGG 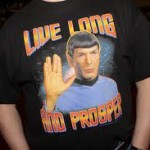 Every Star Trek fan knows “live long and prosper” as perhaps the most famous phrase in the franchise’s history.  As that applies to retirees (whether or not they’re Trekkies) , the good news is they’re living longer today. Prospering, however, can be another story.

There are strategies to employ, and they’re outlined smartly in a usnews.com piece by Geoff Williams that’s headlined What To Do If You’re Running Out of Retirement Money. “It’s a universal fear,” he writes. “In a 2010 Allianz Life Insurance Company poll of 3,257 people ages 44 to 75, 61 percent said they fear running out of money during retirement – more than they fear death.” Excerpts from the article:

“As you’ve probably guessed, you don’t have a lot of great options if you’re in this situation. Gene Diederich, CEO and principal advisor at Moneta Group, a wealth management firm in St. Louis, lays out the path for most people: ‘For those in such a situation, there is often not much they can do but be frugal with their spending, take a part-time job, consider a reverse mortgage and get with a financial planner to maximize the return on their remaining nest egg’.”

These and other options are discussed in the Williams piece, but the one that particularly struck us, probably because of the ubiquitous and slick TV commercials with Hollywood pitchmen including Robert Wagner, Henry Winkler and Fred Thompson, has to do with reverse mortgages.

“’They always get a bad rap because of the fees’, according to[Kenn]Tacchino, a professor of financial planning. But he says reverse mortgages can still be a good option for some retired people who want to maintain their lifestyle and remain in their home. You’d likely want to get a government-issued home equity conversion reverse mortgage, Tacchino says. There are essentially three ways you get income from your house, he says: ‘You can get a line of credit, receive your money in monthly payments or in the form of a lump sum’.

“On the plus side, he says, it might be the perfect solution for an individual or couple who want to live in their house as long as they can and don’t mind that there won’t be a home to pass onto the children.

“Which isn’t to say you should do this. ‘You’re still having to maintain the house, pay taxes and utilities as well as other maintenance’, [Leslie]Tayne, a financial attorney and debt specialist, says. ‘All of this is likely to make less sense further into retirement years’,

“But it depends on the person. You may be in your 90s and find shoveling snow or mowing the lawn good, healthy exercise. You may think it’s better to pay someone else to do it. Or you may be nodding your head in agreement with Tayne. If you like the idea of a reverse mortgage, however, you would be smart to consult a financial planner.”