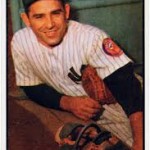 “A nickle ain’t worth a dime anymore”—Yogi Berra

Has anyone been more quoted (or misquoted) than the great Hall of Fame Yankees catcher Yogi Berra, who died last year at age 90? His exemplary life and countless baseball records live on, and so do a considerable number of his colloquial sayings—so-called Yogi-isms–that, as Ric Edelman reminds us in a wonderful cnbc.com column, make him “one of the greatest financial planners of all time. He left us many pearls of wisdom on just about every aspect of personal finance — from investing and insurance to teaching kids about money. He just had his own unique way of phrasing the financial advice he gave.” In highly entertaining (and financially smart) fashion, Edelman then translates “some of Yogi’s best-known aphorisms so you can better understand what he was really saying.” Here are several of them:

It’s ain’t over till it’s over.” You’re invested for the long term, so don’t focus on the stock market’s recent performance. Stay focused on your destination — such as retirement.

“It’s déjà vu all over again.” The fact that stock prices have been down much of this year isn’t unusual. We’ve seen declines before, and we’ll see them again.

“When you come to a fork in the road, take it.” You don’t need to choose between owning stocks or bonds. You should own both

“I usually take a two-hour nap from 1 till 4.” If you’re wondering if this is the time to get out of the market, just sleep on it.

“I never answer an anonymous letter.” Ignore the advice and predictions you hear from pundits and other strangers — people who don’t know you. Rely instead on your own personal financial advisor, who knows you well and knows what you need. Never let media headlines scare you.

“‘Pair up in threes.”‘ You should rely on a financial planner, a tax advisor and an estate attorney.”

“The future ain’t what it used to be.” Exponential technologies are going to change every aspect of our lives — just as I explain on my radio and TV shows and in my monthly newsletter.

“It gets late early out here.” If you haven’t yet started saving for retirement, start now.

“If the world were perfect, it wouldn’t be.” You don’t have to be 100 percent correct with every single financial decision. No one ever is. Warren Buffett said, ‘It’s better to be approximately right than precisely wrong’.

So, how many of these timeless gems were truly Yogi’s, for, as he reminded all, “I never said most of the things I said?’ Maybe, in the end, as he is also alleged to have said, we should take “take it all with a grin of salt.”