PAYING FOR THE KIDS 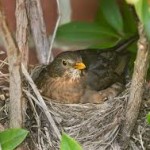 It’s called empty nest syndrome, but it’s also been said that many parents see more of their adult kids after they leave the house. And of no small consequence, they continue to subsidize them. As a result, as Carol Hymowitz writes in a highly interesting bloomberg.com piece headlined Your Kids Are Ruining Your Retirement, “baby boomers are putting their retirements at risk by spending too much on their adult children. With real wages stagnant and unemployment among those age 16 to 24 running above 12 percent, large numbers of households continue to dole out cash to children no longer in school, covering rent, cell phones, cars, and vacations.” In other excerpts from the article:

“A July 2014 survey by American Consumer Credit Counseling, a Boston nonprofit, found that a higher proportion of U.S. households (1 in 3) provide financial assistance to adult children than support for elderly parents (1 in 5). ‘This is putting a huge wrench into retirement savings’, says Pamela Villarreal, a senior fellow with the National Center for Policy Analysis in Dallas. ‘The more boomers put out for adult kids, the less they can put aside for themselves, which is scary as they live longer and need savings to last them into their 80s and 90s’.

“More than a third of adult millennials receive regular financial support from their parents, and 1 in 5 still live at home and don’t pay rent or expenses, according to a November 2014 survey by Bank of America. It isn’t just the unemployed or the low-paid who are needy. The poll, which had 1,000 respondents between the ages of 18 and 34, found that among those earning more than $75,000 a year, 25 percent had their parents pay for groceries at some point and 21 percent got money for clothing.”