OF RULES AND ROLLOVERS 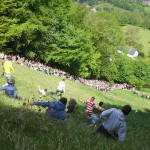 “The Internal Revenue Service has released rules governing rollovers of funds from private, non-profit and governmental retirement plans into designated Roth IRAs within the same savings plan. Such rollovers from 401(k), 403(b) or 457(b) accounts were expanded this year to be open to any vested funds in a retirement plan that allowed them, but companies were awaiting clarification of the rules. Rolling funds into an IRA allows a plan participant to pay taxes now and withdraw the money tax free during retirement.

“Under the IRS rules, only amounts fully vested are eligible to be moved to a Roth. Distribution of any money moved falls under the same rules as when it was held in the before-tax account. Because participants are not allowed to remove money from a plan, they are liable to pay any taxes owed. The IRS recommended that salary withholdings be raised or estimated tax payments be made to avoid penalties.

“Retirement plans that want to allow Roth rollovers must amend their documents to comply with IRS rules by Dec. 31, 2014, or the last day of the plan year, whichever is later. Changes to 401(k) Safe Harbor plans  are usually not allowed during a year, but the IRS is allowing changes regarding Roth rollovers as long as the changes are made by Dec. 31, 2014. For 403(b) plans, the IRS has not yet announced the deadline for those plans that qualified for a remedial amendment period.”