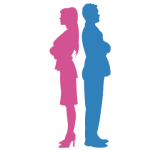 Talk about gender inequality! “Women past traditional retirement age have about 25% lower incomes than men in the same age group,” according to a revealing thinkadvisor.com piece headlined Retirement Income 25% Lower for Women: NIRS, citing a March report from the National Institute for Retirement Security. Other major excerpts from the article:

“Women receive less from Social Security and have lower account balances in retirement savings plans, the report found. Furthermore, while women are at a distinct disadvantage compared with men, even among women, some demographics are worse off than others. Lower levels of income, and lower access to and participation in retirement plans, among other factors, contribute to lower overall savings levels for black and Latina women compared both with men and with women overall.

“The report is based primarily on data from the Survey of Income and Program Participation conducted by the U.S. Census Bureau.

“Median household income for women 65 and older was $35,810 in 2013, the report found. Over half of that is from Social Security benefits, and about a quarter is from defined benefit and defined contribution plan savings. Household income for men had a similar distribution but a higher level: of their $48,280 annual income, 47% is from Social Security and 25% is from DB and DC plan savings.

“Wages make up a declining share of household income, unsurprisingly, but after age 80 represent 10% of a woman’s household income, compared with 8% of a man’s. A 2015 survey by NIRS found that 41% of women said they needed to work in retirement, compared with 31% of men, to make up for less time in the work force, lower earnings or to make up losses incurred during the recession.

“The shortfall in retirement savings among women is happening in spite of greater access to retirement savings plans, the report found. Historically, men were more likely to work for employers who offered a retirement plan, but that trend reversed between 1998 and 2012. Since 2006, women’s participation rates have equaled that of men, but differences in eligibility and pay have made it difficult for women to save as much.

“Between 1998 and 2012, when more women than men worked for employers that offered a retirement plan, they were less likely to be eligible to participate: 85% were eligible, compared with 89% of men.

“For non-white women, the wage gap is especially pronounced. Overall, women earn $0.79 for every dollar earned by men, the report found. However, black women earn only 60% of what men earn, and Latina women earn 55%.”