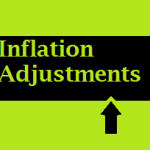 This inflation announcement is made every year by the IRS, and covers 40 provisions this year. Among them:

The IRS also announced the 2014 contribution limits and other figures for pension plans and other retirement-related items. The elective deferral (contribution) limit for employees who participate in Sec. 401(k), 403(b), or 457(b) plans and the federal government’s Thrift Savings Plan remains unchanged at $17,500, as does the catch-up contribution limit under those plans for those age 50 and over, which stays at $5,500.