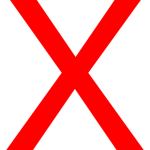 Stress, of course, comes in many forms. And when it comes to where it resides among various demo groups grappling with facets of retirement, well, X seems to mark the spot. In fact, “Generation X’s skepticism about retirement may be warranted, according to a report from the Insured Retirement Institute (IRI),” writes Jill Cornfield in a superb plansponsor.com piece headlined Most Gen Xers Dismal on Retirement Hopes. “Overall, more than one-third of this demographic has nothing saved for retirement. Other research calls this generation by far the most stressed.” Other major excerpts from the article:

“While retirement may still be years away, only 8% of Gen Xers have enough saved to support themselves in retirement. Even among the oldest Gen Xers, those aged 44 to 53, only 11% have adequate savings. To determine if a Gen Xer has sufficient savings, IRI considered the amount needed for an individual to purchase a deferred income annuity that would generate enough annual retirement income to bridge the gap between the average Social Security benefit and average expenditures for a retiree.

“One problem could be that most Gen Xers—eight in 10—are DIY investors who manage their money without any professional guidance. Only one in five Gen Xers works with a financial professional. But Gen Xers who do seek professional advice are twice as likely to have at least $100,000 saved for retirement, compared with those who plan on their own. About eight in 10 Gen Xers describe themselves as being somewhat or not very knowledgeable about investing, and two-thirds rate their financial IQ as being average or low.

“Those that have sought out advice say they are getting the help they need. More than eight in 10 say their financial adviser has discussed their plans for retirement, and seven in 10 of those who have consulted with a financial professional have had a retirement plan prepared for them. Gen X members who turn to professional services use them for investing (62%) and general financial management (45%).

“Given their concerns about finances in retirement, it’s surprising to find that the study reveals relatively few (42%) have tried to calculate how much they need to save to live comfortably in retirement. But some good news is that, among those Gen Xers who have attempted to figure out how much they need to save, six in 10 have included health care costs in that calculation.

“However, they miss the mark in terms of estimating how much health care might cost them during retirement. From age 60 on, retirees can expect health care to represent approximately 33% of expenses. About four in 10 Gen Xers believe health care will consume less than 20% of their income, with fewer than one in five estimating a more realistic 31% to 40%.”