EMERGENCY DIPS IN THE RETIREMENT POOL 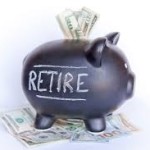 “Building an emergency fund might just keep your retirement plans on track,” writes Kelli B. Grant in an excellent cnbc.com piece headlined
Stop using retirement accounts as emergency funds. The first part of her article continues: “Americans have been putting more into their retirement accounts, with 21 percent of workers saying they are saving more than they were last year, according to a recent Bankrate.com survey. Despite market volatility, 401(k) balances are up almost 2 percent from the first quarter, according to Fidelity data, to an average $88,900. Over the same period, average balances for long-term millennial savers rose to a record high of $92,900.

“But not all savers are able to keep up the momentum.

“One in 10 workers has taken a hardship withdrawal from a retirement account, according to the FINRA Investor Education Foundation’s recent National Financial Capability Study of 27,564 adults. Another 13 percent have borrowed from retirement savings.

“The leading reasons for borrowing? ‘Unplanned, major expenses’ and credit-card debt, each of which account for 23 percent, according to a 2015 survey of 4,550 adults in the workforce by Transamerica Center for Retirement Studies. Top reasons for hardship withdrawals include medical expenses and payments to prevent eviction from a residence.”