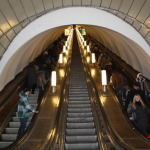 And statistics about consumers, it might be said, reveal much about how people feel about the economy. “Consumer confidence took a tumble in September after four months of improvement over concerns about jobs growth and the economic expansion,” wrote Vicki Needham in thehill.com. Excerpts from the story:

“The Conference Board said [on Sept. 30] that their latest index declined to 86 in September, a steep drop from 93.4 in August, which had been a seven-year high.

“The index measuring current conditions decreased to 89.4 from 93.9 because of a less positive assessment of the labor market, especially after growth slowed in August.

“Meanwhile, the expectations index dropped to 83.7 from 93.1 in August.

“Consumers remain troubled about the lack of rising wages even amid solid jobs growth this year.

“The proportion of consumers expecting growth in their incomes rose in September to 16.8 percent compared with 15.5 percent in August.

“However, the proportion expecting a drop in income also rose — to 13.4 percent from 11.6 percent a month ago.

“Separate reports released on [Sept. 29] showed that wages rose 0.3 percent in August, the fastest pace in three months while consumer spending was up 0.5 percent, the same as July.”