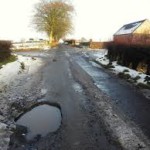 The road to retirement can be littered with potholes, so the clearer the warning signs, the better. Some potential financial risks are outlined persuasively by Tom Sightings in an excellent piece for usnews.com headlined Watch Out for These 4 Retirement Land Mines. Excerpts from his article:

“Once you’re retired, you live on a fixed income. There are no more cost-of-living raises, bonuses or employer contributions to your retirement plan. Even if you can afford your lifestyle today, you have to plan for what’s going to happen over the next 30 years. Will Social Security keep up? Will your investments produce enough income? Will you outlive your money? Here are four land mines to avoid when charging ahead into your financial future.

“1. Stock market declines. The average workplace retirement plan balance has crested to over $100,000, according to Vanguard data, and many people over age 60 have pushed up their balances way beyond that. Workers have been saving more. The stock and bond markets have been going up for the past six years and are hitting historical highs. But some people, like Yale economist Robert Shiller, warn that the stock market may be nearing a peak and could be headed for a fall. One risk to your retirement nest egg is another stock market collapse similar to 2008, when the market went down 38 percent, or even worse, a three-year decline like what happened between 2000 and 2002.

“3. Inflation. The cost of living has been going up less than 3 percent per year for most of the last decade. But think of what happened over the longer term. The Consumer Price Index – the price for an average basket of goods and services – sits at a 287 percent level compared to 1980. Whatever cost $100 back then now costs $287. And college expenses and medical costs have gone up more than other prices. While inflation has recently been more modest, it may be starting to increase.

“4. Your own individual risk. The fourth major risk to your financial life is the one specific to your own situation. Do you have a pension? If your old company goes bankrupt, your pension is likely insured by the Pension Benefit Guaranty Corporation. But some private concerns, especially small companies, are not covered. Public pensions are not covered either, because they have their own legal protections. But nothing is ever certain. Ask the retirees in Detroit. Other individual risks include your local real estate market, which could affect the value of your house, and the state of your health, for no other expense is more unpredictable than your health care costs.

“There’s no reason to panic over any of these risks. The best defense against future unknowns is to keep your IRA or 401(k) in a diversified portfolio of stocks, bonds and cash equivalents, and to have several different sources of income, including Social Security, a pension, your own savings, and perhaps most important of all, the security of being able to rely on friends and family to help out if you need it.”